The following cases have met the SGII size/volume criteria, and are currently being actively explored, except, to the best of our knowledge, SAS, which was merged with Kirkland Lake Gold (KL).

Hislop Township - One of the first test holes in Ontario by a public issuer using SGII was undertaken by SAS on their Hislop North (147 zone). It was a deep vertical hole to test for the extension of the adjacent Primero Gold 147 zone.

SAS had drilled several unsuccessful holes in search of the elusive mineralized extension. When the SGII model was used, the deep vertical hole, although not drilled in exactly the recommended spot identified by the SGII algorithm, still intercepted 10.38 g/t over 25 m.

The expected results were achieved, predicted geological structures were confirmed, and the resource base was increased. 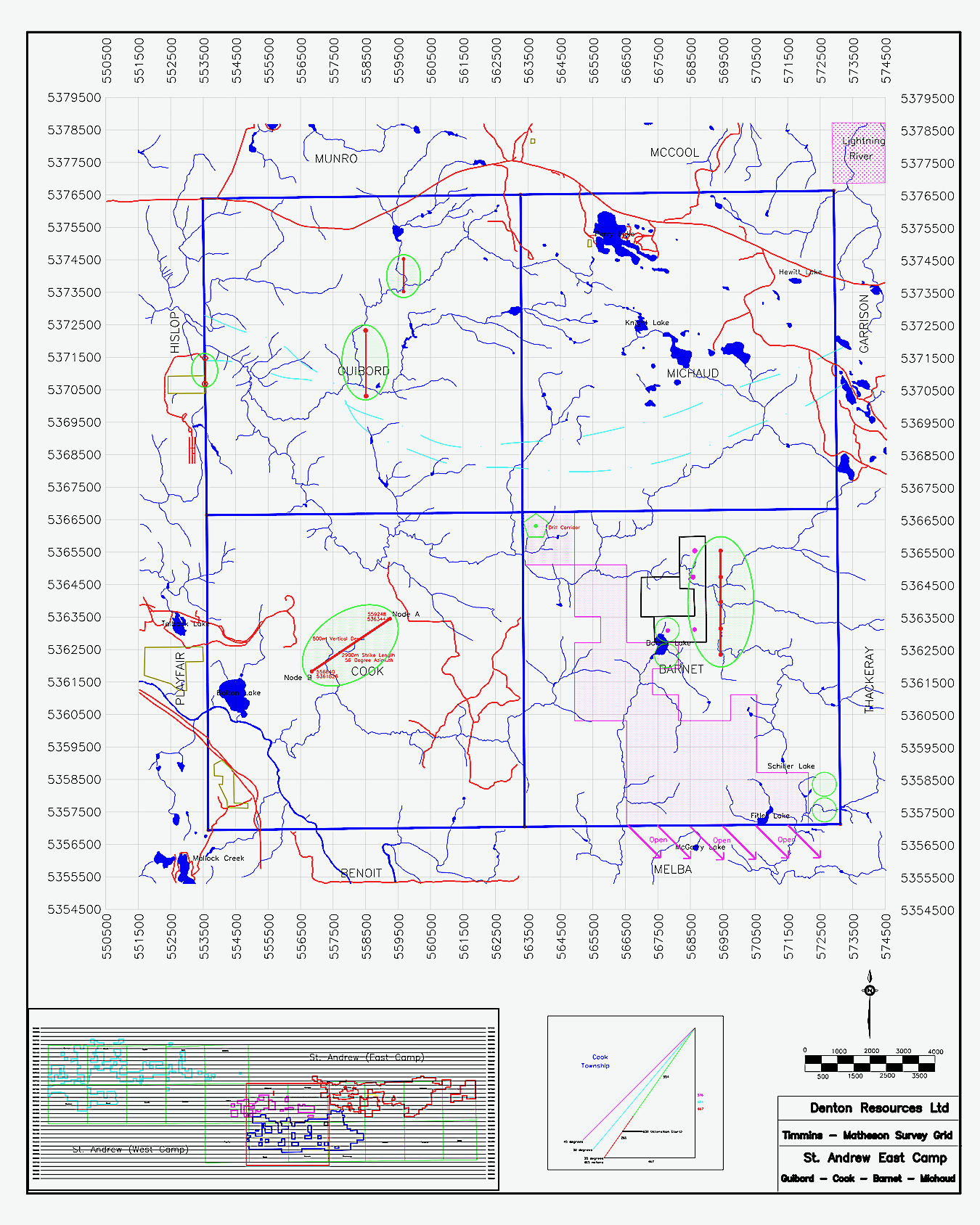 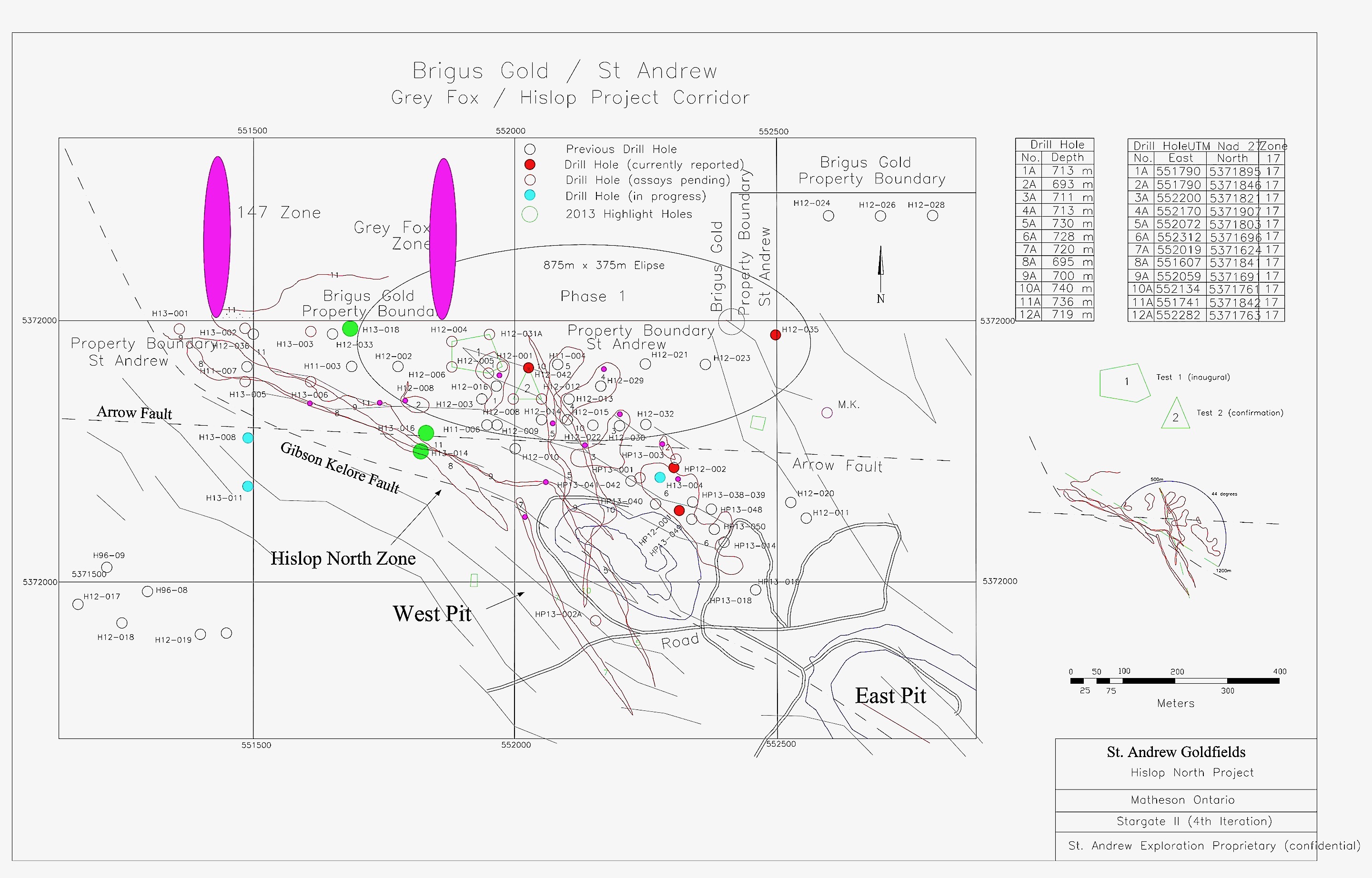 The upper layer X outline is the area of the Stargate II survey flown over the Republic, Washington project area (Overlook and Lamefoot Mine Corridor).

The lower X outline (offset to the west) represents  a down-dip layer projection of the Graben Basin betwen the Stargate II targets on the west side (Curlew Lake Trend) and the east side (Overlook Trend).

Mark Kolebaba President and CEO of Adamera states “The effectiveness of this survey is yet to determined by the Company. However, the fact that it appears to have detected the known Overlook gold deposit and a second anomaly over our most significant soil anomaly on the property is very compelling.”

Kolebaba further states “Adamera did not provide Earth Science Services any geological or geochemical location data. Thus the anomaly appears to be a discrete, independently identified target, and we are excited to explore it further.”


Nov. 8, 2016 - ”The new Stargate II targets either flank past- producing deposits, or are located along a mineralizing trend recently recognized by Adamera.”

A total of six geophysical anomalies have been identified by Mr. Glenn Galata of Earth Science Services. The survey identified an AMT target coincident with the known Overlook gold deposit and a second target approximately 100 metres from the deposit. That target is in part coincident with a significant gold, arsenic and copper soil geochemical anomaly developed by Adamera.

Nevertheless the fact that one anomaly is coincident with the Overlook gold deposit and that others are near the Overlook and Lamefoot deposits is highly encouraging. Incidentally, Adamera did not provide Earth Science Services any geological or geochemical location data prior to the survey. 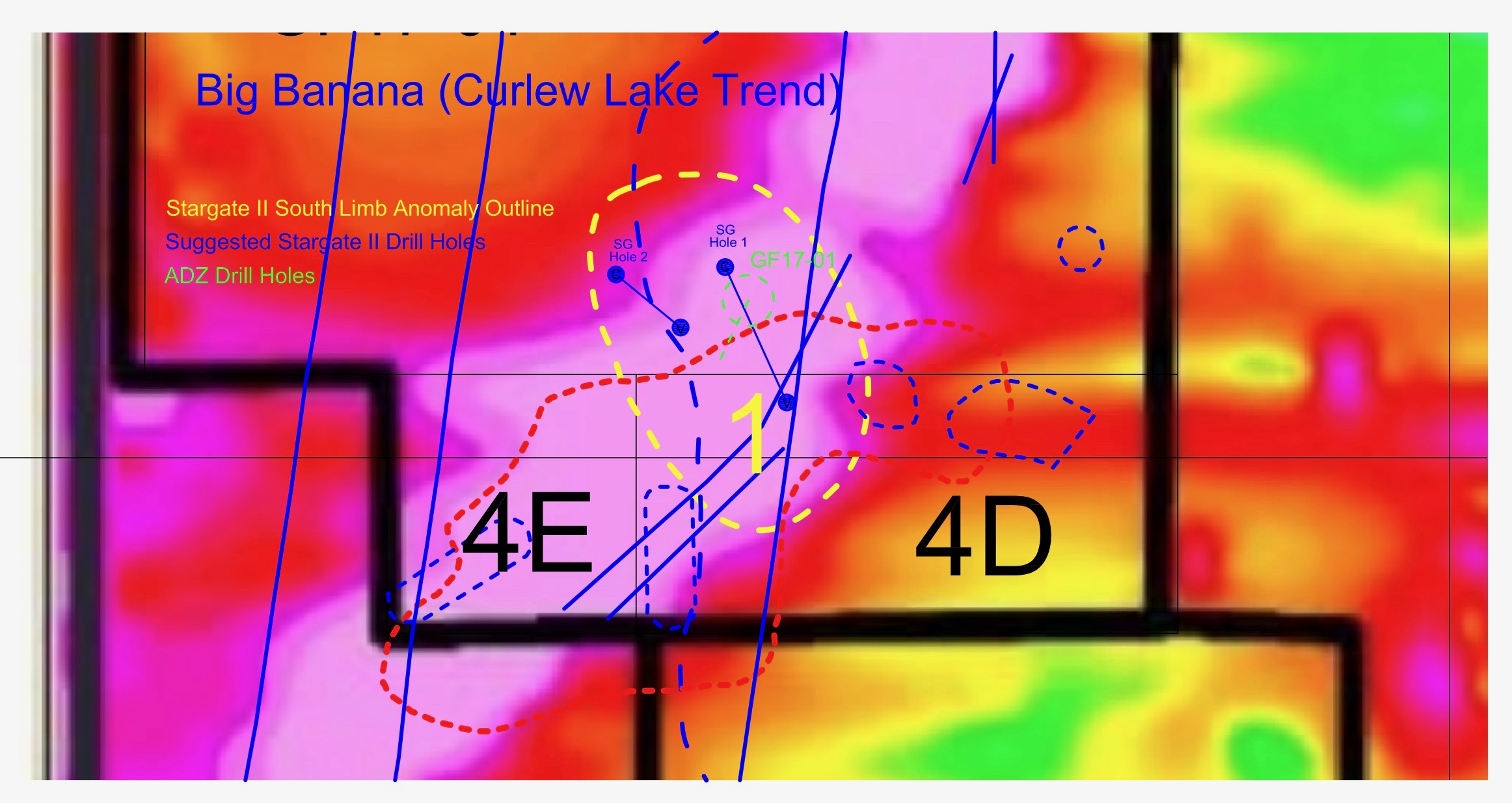 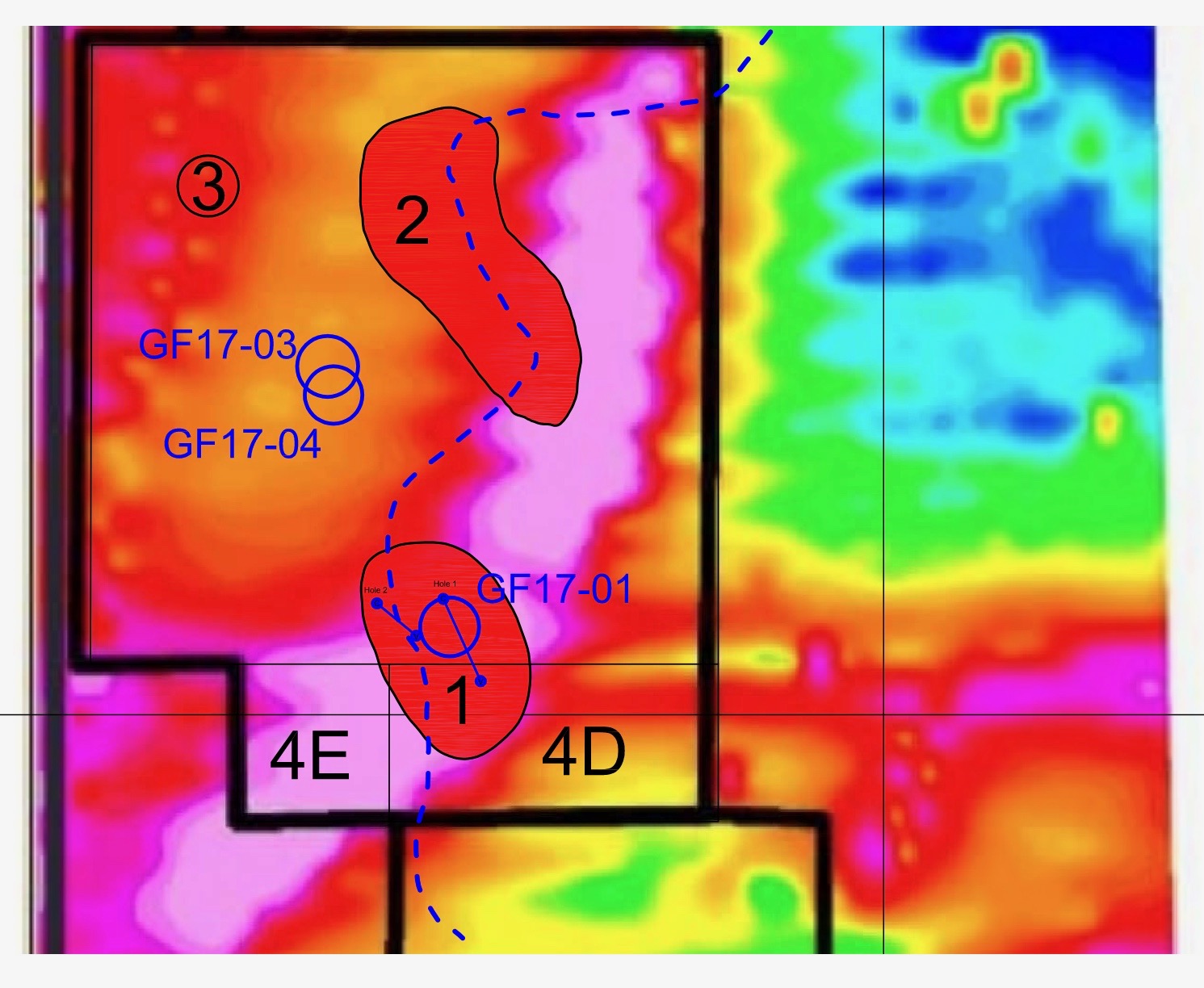 Sept. 8, 2016 - The final drill hole, RLG-16-31, which contained the high grade gold, intersected a highly silicified, clastic/brecciated volcaniclastic unit. The alteration appears to be similar to the alteration in the NT Zone. This gold-bearing rock unit was identified and targeted by the SGII System provided by Earth Science Services Corp using Ultra-Sonic AMT technology.

The Stargate II System has also identified additional drill targets where the PBS Zone, the NT Zone and the Golden Arm Structure are interpreted to converge.

Dec. 6, 2016 - The Structural Intersection target area is believed to hold compelling exploration potential as the intersecting structures provide a geological environment for the occurrence of significant gold zones.

Previously reported Hole RLG-16-31 was drilled west to east into the NT Zone and was located near the northern limit of the Structural Intersection area. The design of hole RLG-1631 was provided by Earth Science Services Corp’s Ultra Sonic AMT geophysical system. None of the holes reported in this eight-hole program were targeted using the Ultra Sonic AMT system. Earth Science Services has provided the Company with three proposed holes into the southeastern portion of the structural intersection area. 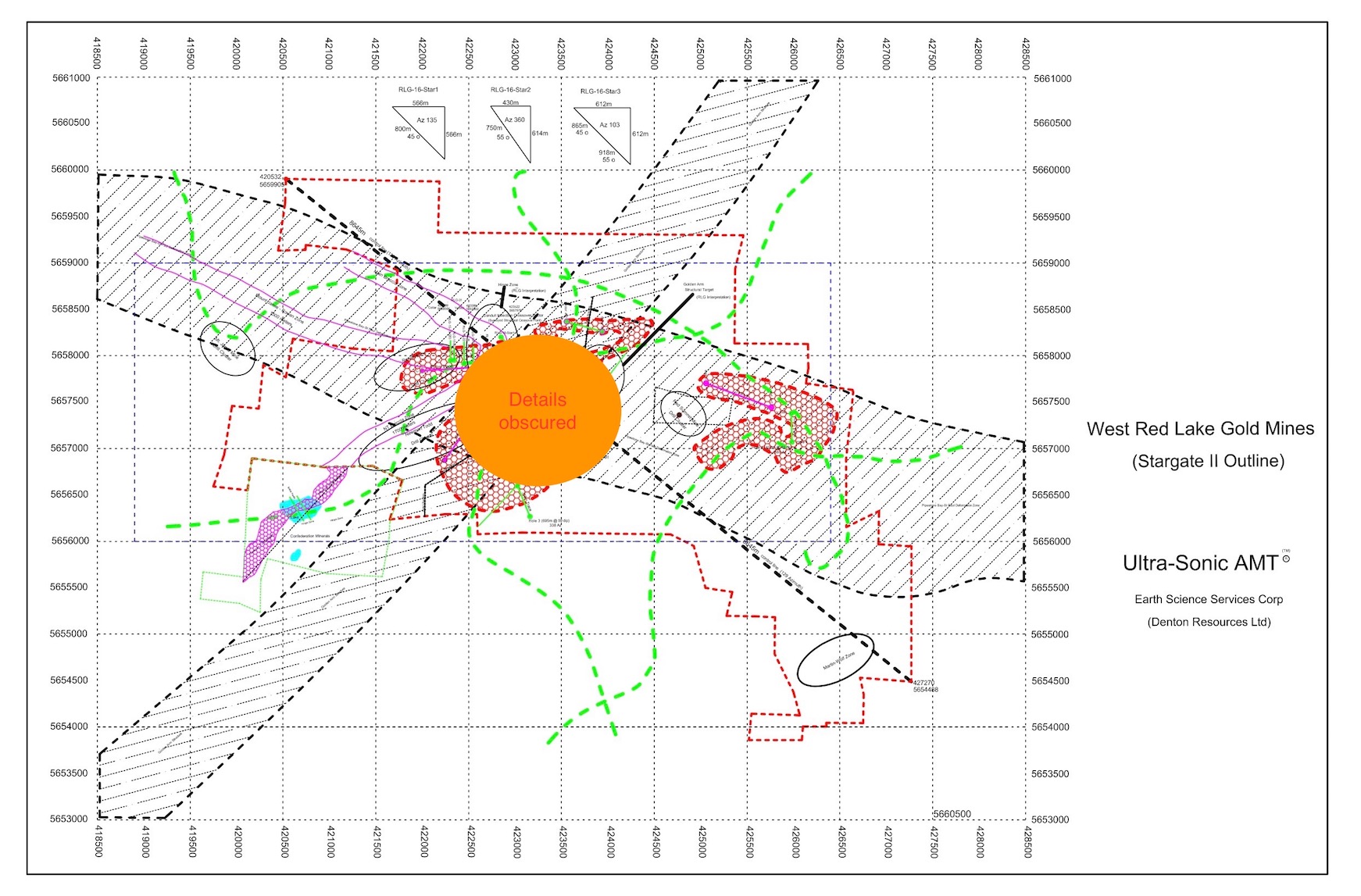 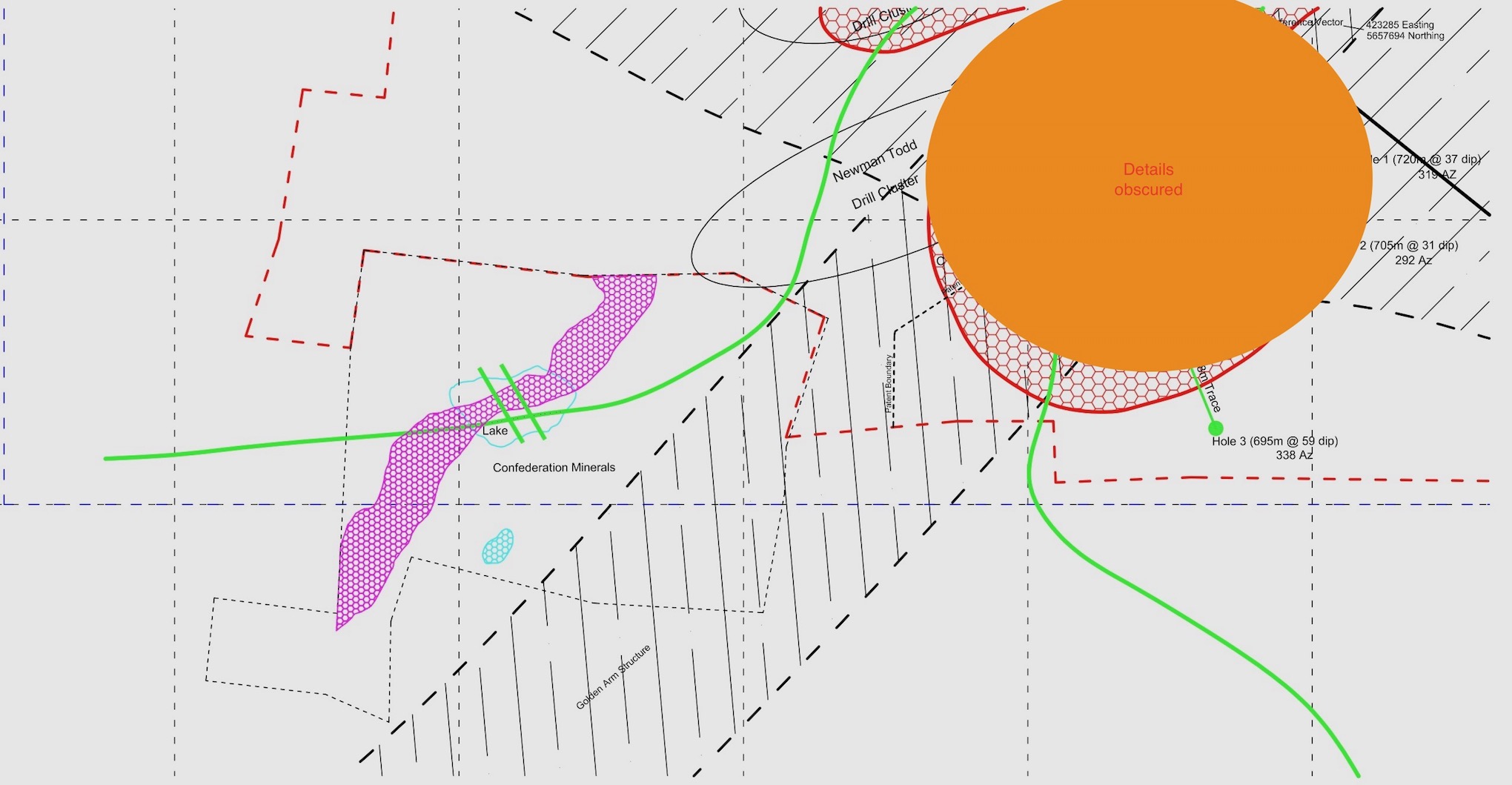 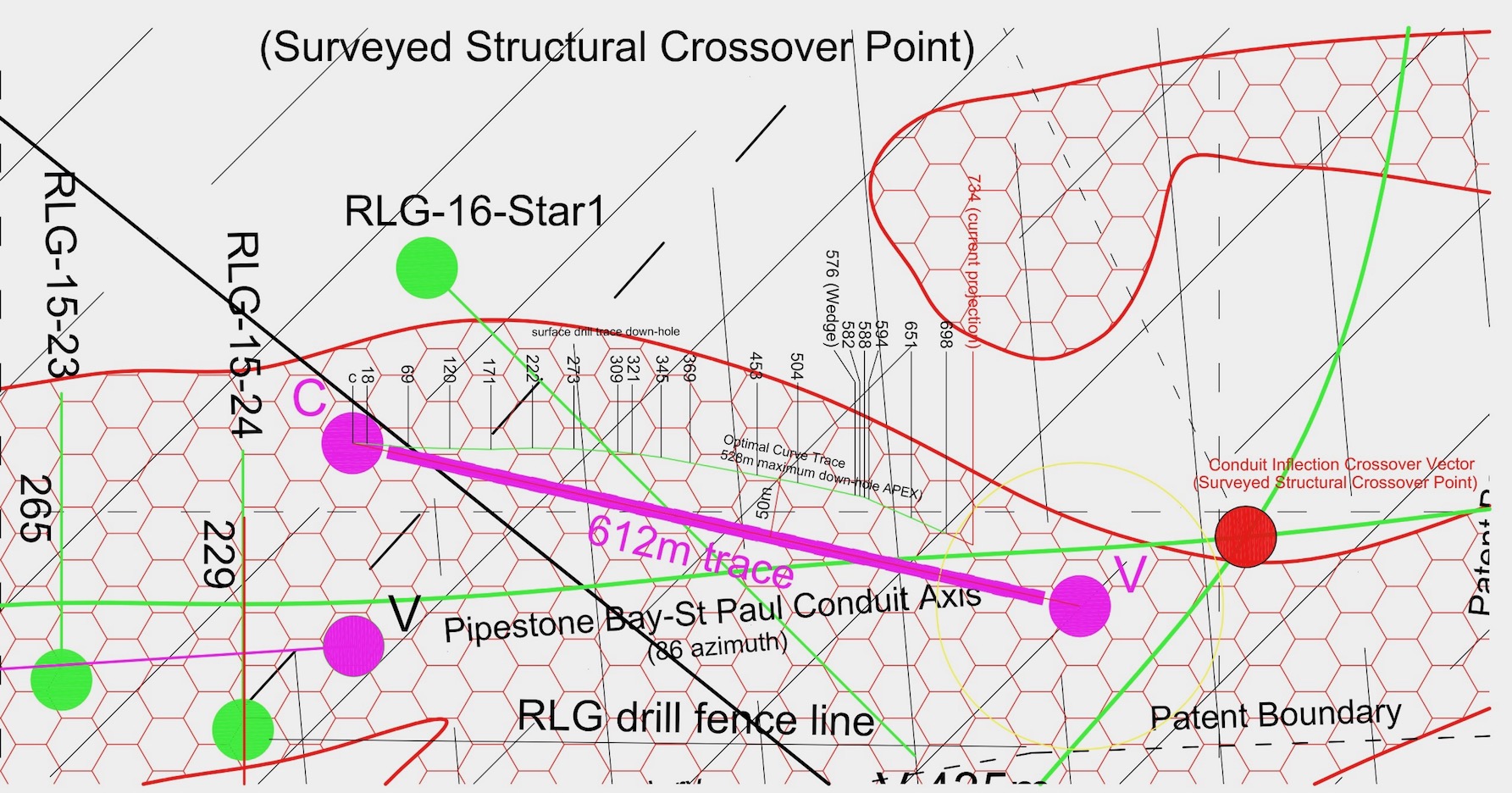 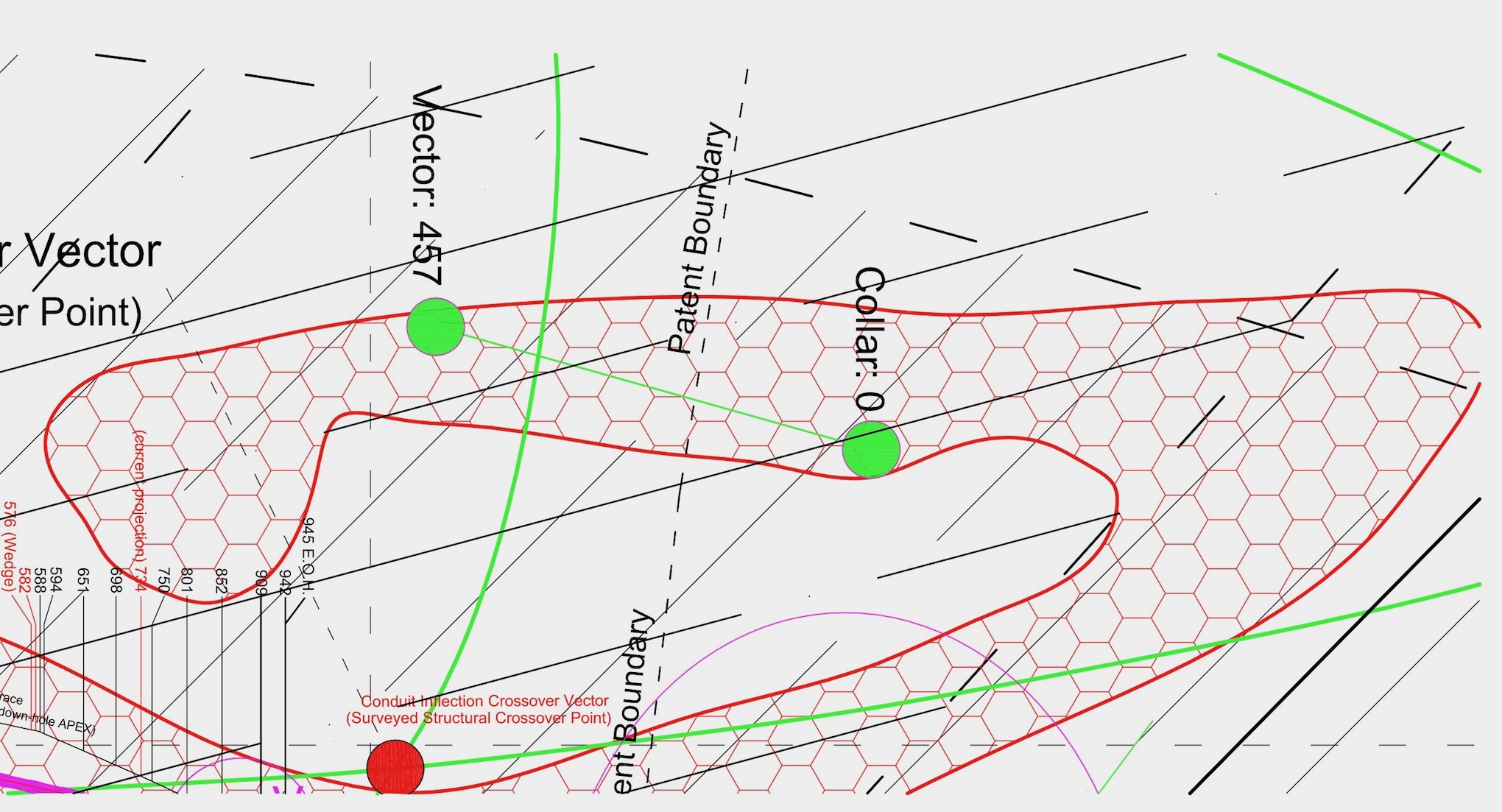 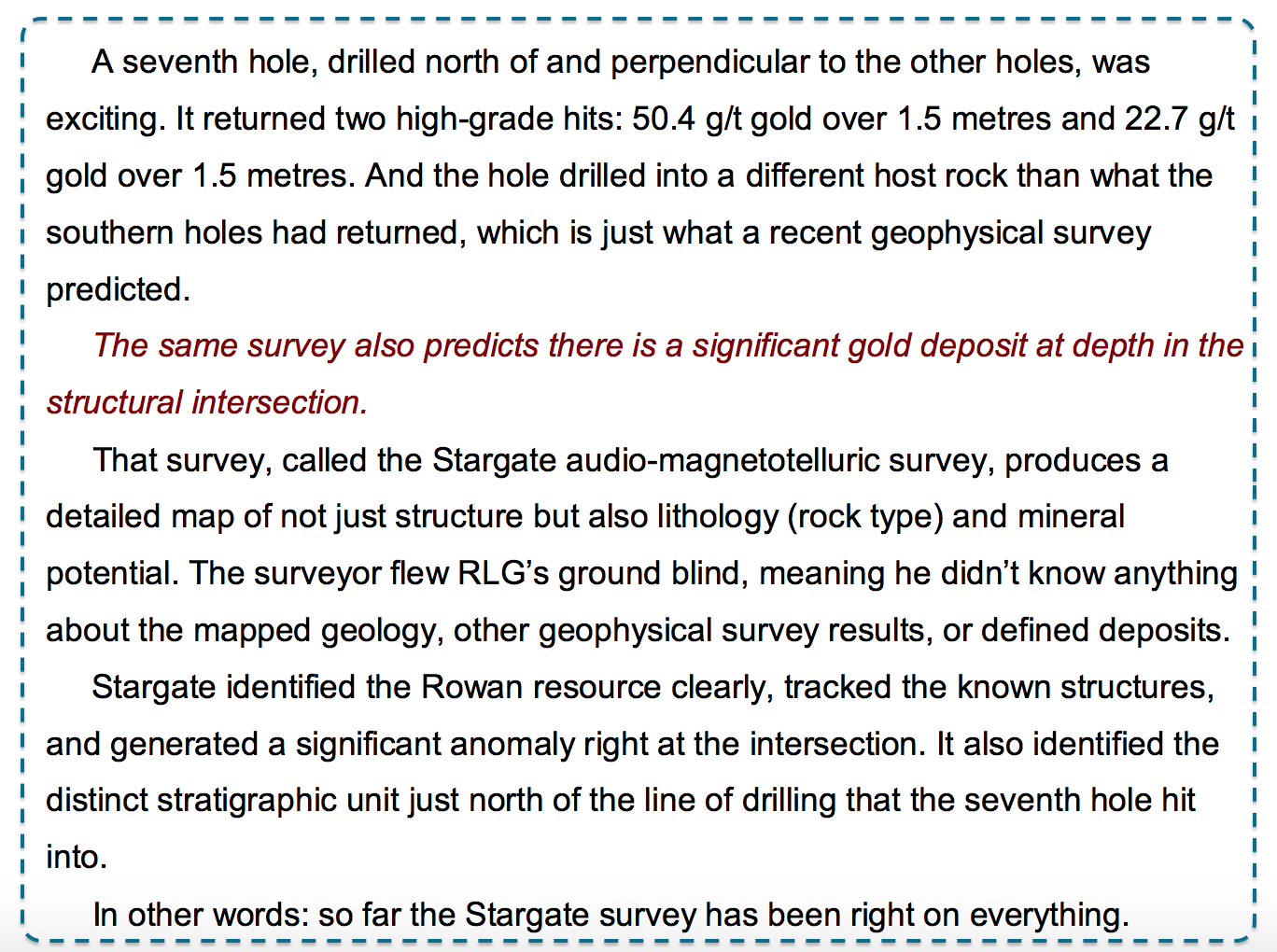 Gwen Preston discusses the important variables for a successful junior
mining company. She interviews Tom Meredith of West Red Lake Gold Mines
as an example of a company that has the recipe for success.

The initial hole will be drilled from southeast to the northwest into the Golden Arm Structure to test the area of mafic-ultramafic contact identified as an exploration target by the underlying geology and an AMT geophysical survey. (by ESSCO).

Most of the drilling focused on the Mt. Jamie and Rowan areas, with underwhelming results.

ESSCO was not involved in the drill program. Our input was limited to providing the 3 drill targets and maps to RLG,  in June 2016.

"Noble is pleased to announce that it has entered into a services agreement with Earth Science Services Corp (ESSCO) to use its proprietary Stargate II AMT technology to provide detailed drill target identification of a high priority target in Dargavel Twp., Northern Ontario.

SGII uses an Ultra-Sonic enhanced, deep penetrating AMT (Audio-Magnetotelluric ) system and proprietary algorithms, hardware and software. A survey data environment has been identified on the Dargavel Twp. property of Project 81. Analysis of the survey data identified a target of significant magnitude based on their size/volume criteria."

As the target area in Dargavel is too wet and swampy,  drilling is planned for the winter season when frozen conditions will permit access.

This area has since  been optioned to Peat Resources (PET). Peat changed its name and focus. It is now Cobalt Blockchain, working on their  Africa projects.

In the above mentioned services agreement, it was agreed that one 900 meter hole would be drilled into the target provided by ESSCO. This has not yet been accomplished. This target did not get drilled in the winter of 2017- 18 as expected. 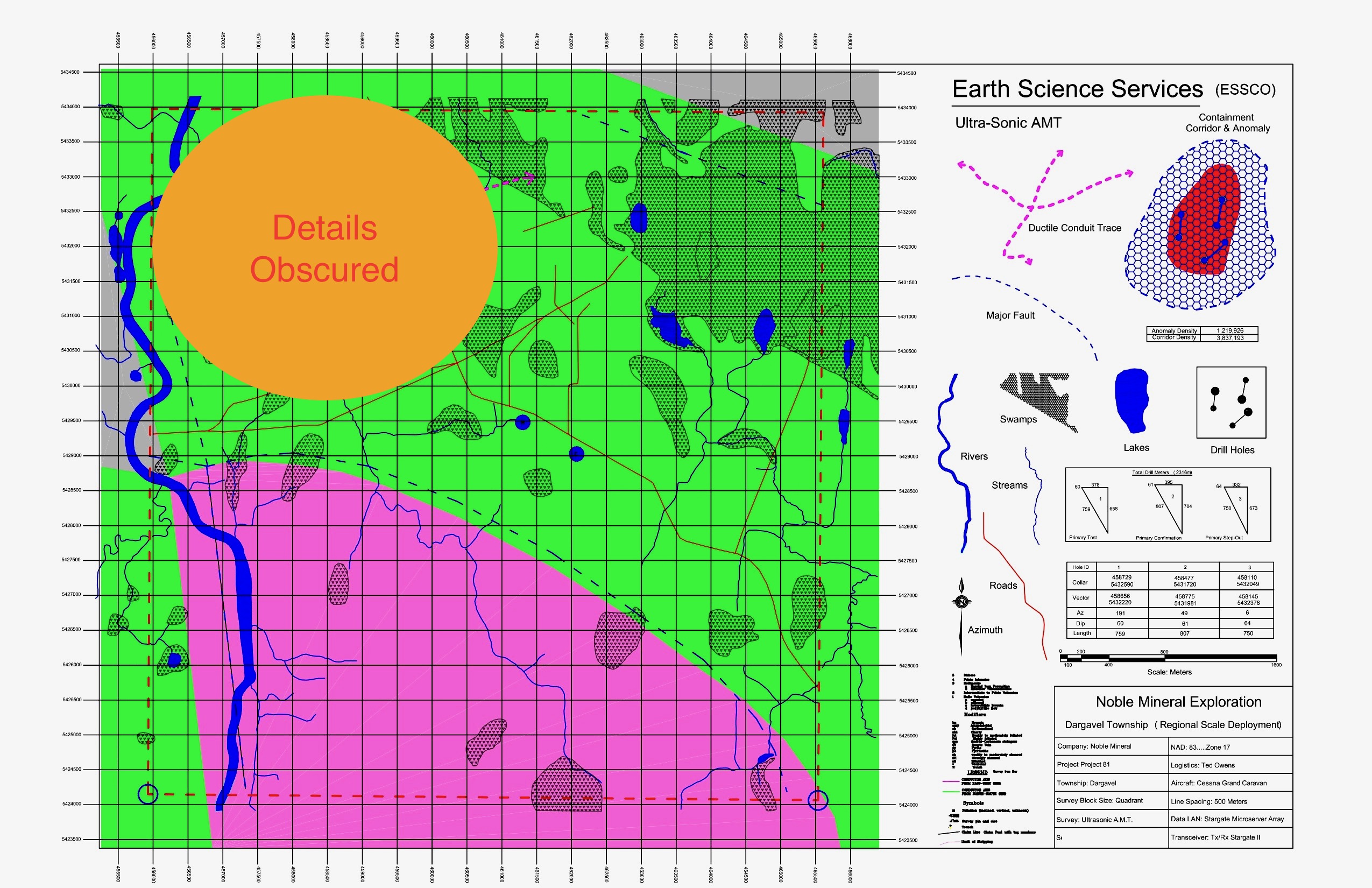 After the ESSCO/Noble agreement to provide the above Dargavel Twp. target in May 2017, negotiations with Noble for additional Stargate II drill targets were undertaken.

NOB was land-rich, cash poor, had a large mining tax bill ($1.2m) , their stock was languishing at under a nickel and they were looking for j.v. partners. ESSCO brought in  a private capital group to Noble to  participate in a j.v.  drilling program.

The participation of this group in project 81 in August  caused the stock to more than  double, a nice benefit for shareholders. They worked out a deal on area  1   in Carnegie Twp. (see below). However, due to term issues, ESSCO is not party to the agreement.

In our negotiations with Noble, ESSCO provided Lot and Concession details of our key drill target areas to the company. The map below shows the  4 key SG II  target areas. To our knowledge, only area 1 has been optioned.

Note the proximity to the world's largest zinc mine -Kidd Creek, discovered in 1964, and in production ever since. For over 50 years, major mining companies and  the best minds in the business have been studying this area, looking for another Kidd, to no avail. Many paper and theses have been written on this mine, explaining the orogenesis and geology, yet no sister mine has been found, and the Kidd Mine is scheduled to shut down in 2022.

Yet the Stargate II System has mapped out the faults and structural traces in this whole region, these are the feeder system for the mineralization,  the 'Magma Highways' some would say. The data was compiled and analyzed, and the main drill targets  identified. This very valuable information  is available from ESSCO. 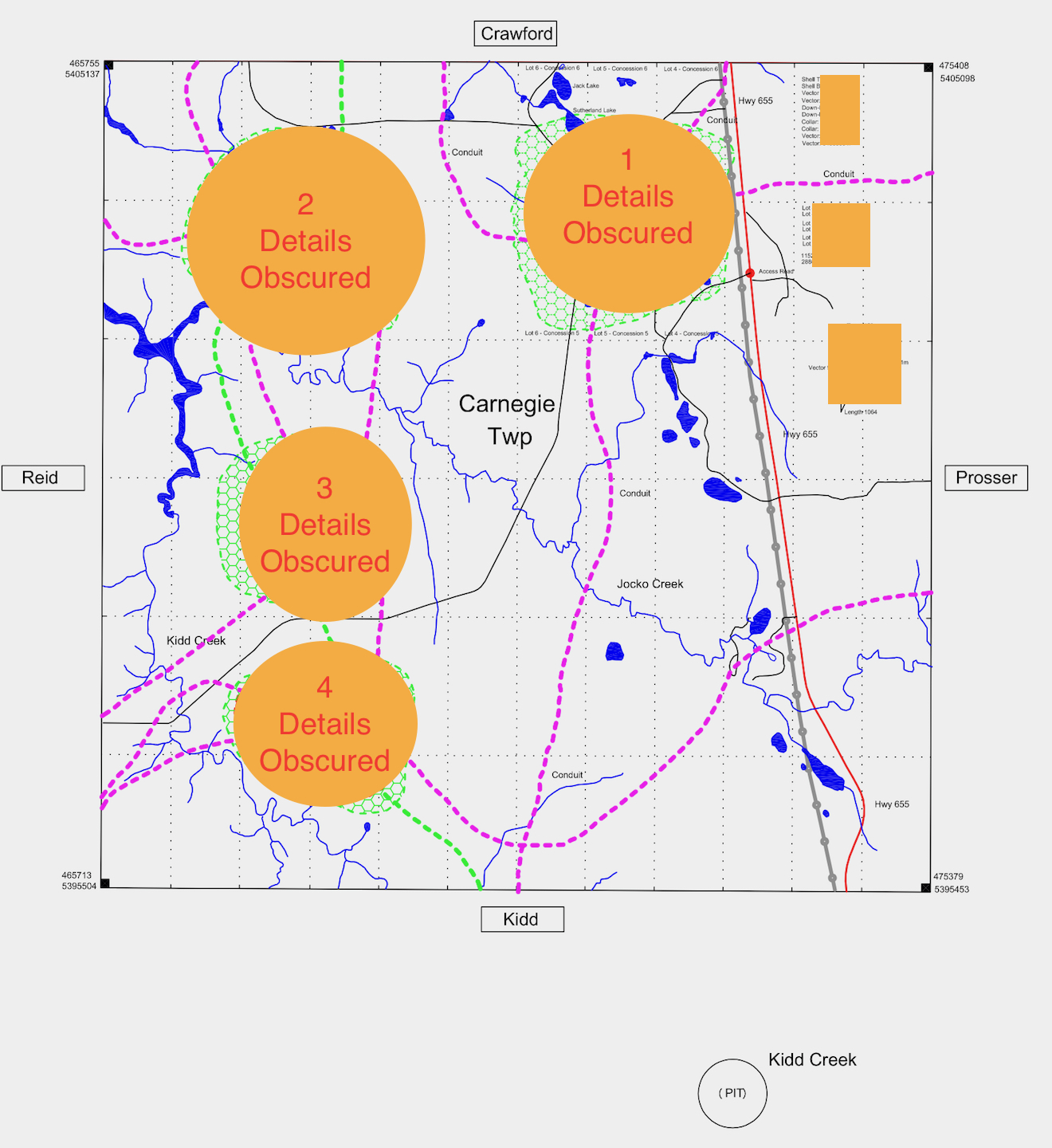 Golden Highway Project - In 2016 ME drilled SGII targets which confirmed the predicted stratigraphy and lithology at depth.

ESSCO provided and spotted a prospective drill target for ME in the spring of 2017, but it remains as yet untested. 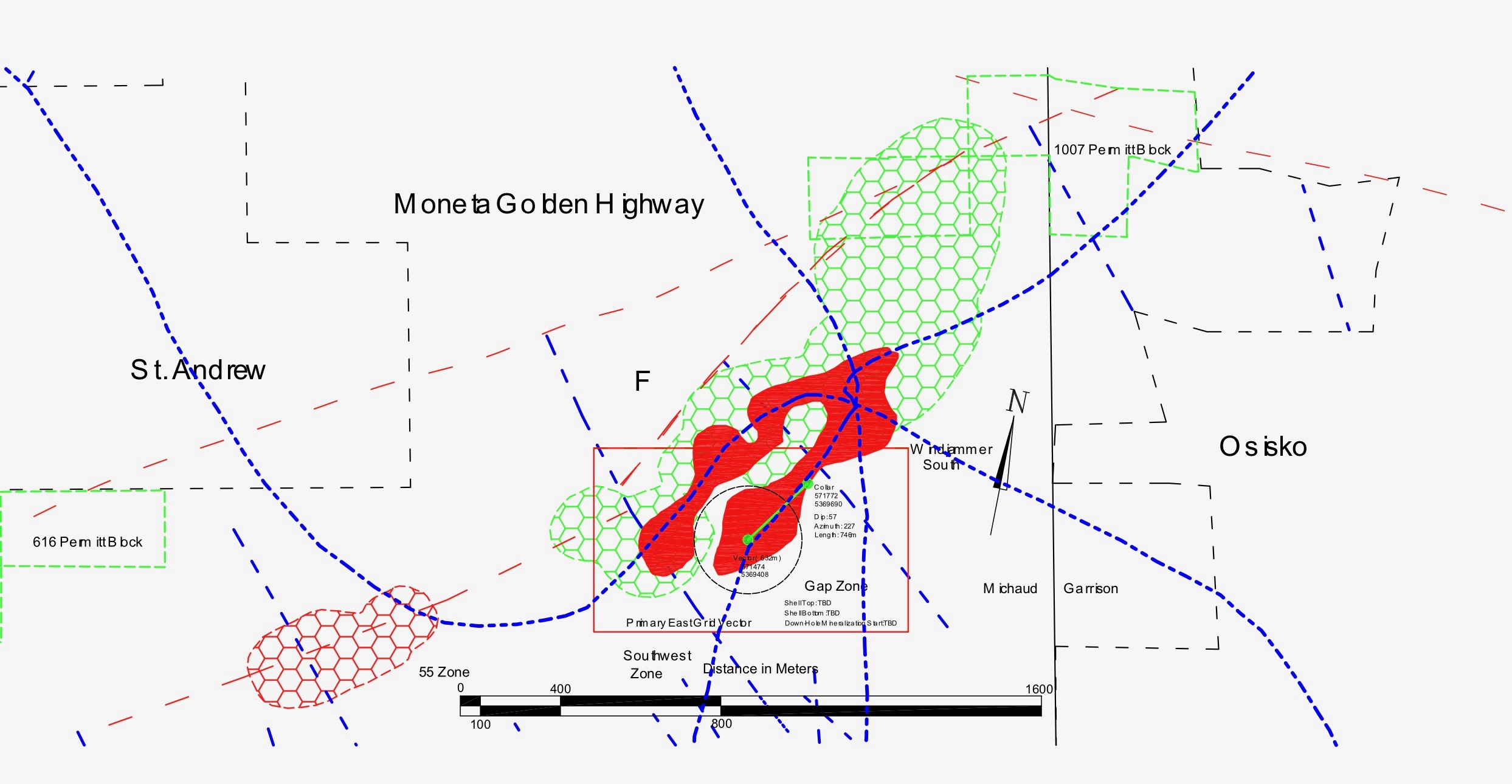 In May 2017, RJK agreed to drill an SGII target on their Maude Lake property. It was to be a deep hole, 1,050 meters. The drilling was performed by Norex of Timmins in June. Management abandoned the hole at about 640 metres due to apparent unstable rock conditions. The drill was stopped while in a predicted (by SGII) alteration zone. ESSCO maintains that this demonstrates the accuracy of the SGII sytem, and that if they had persisted in drilling through the alteration zone, the predicted mineralization would have been encountered. The Maude Lake project was halted and the property option lapsed.

The Eskay Creek area was surveyed using the SGII technology some time ago, when SAS held the claims in the area of interest. The economic downturn and the corporate takeover of SAS by KLG and their subsequent change of exploration focus and ownership meant that the SGII data there was left untested for years.

The recent improvement in the exploration outlook and industry economics led to significant
recent activity in the area and a revival of interest in the SGII identified targets in this region.

The Stargate II system outlined a criteria meeting target on their Timmins property, adjacent to the world famous Hollinger mine. For additional information, please see the stateside report.

On November 7, 2011, the Company announced that it had signed a Letter of Intent ("LOI") with TimGinn Exploration Limited to earn a 60% interest in a past‐producing gold property (the “TimGinn Property”) located in Tisdale Township in the heart of the Timmins Gold Camp adjacent to Goldcorp's Hollinger Mine (19.3 million oz) and McIntyre Mine (10.7 million oz). The TimGinn Property consists of 9 mining claims covering 238 hectares. There was brief gold production on the TimGinn Property during the 1920’s by Consolidated Gilles Lake Gold Mines when a two compartment shaft was sunk to a depth of 940 feet. The TimGinn Property was unexplored below 300 m deep.

The agreement stated that McLaren can earn a 50% interest in the property by incurring $2 million of exploration expenditures by April 30, 2015 and an additional 10% interest by incurring an additional $2 million in exploration expenditures by April 30, 2016. On December 21, 2015, the Company announced that it had relinquished all right and title to the TimGinn gold property. (See sedar filing for Mclaren Resources Aug 6, 2016). The Company announced that it was refocusing its business activities towards the commercial real estate property industry...and that the Company does not plan to pursue further expenditures on mineral exploration property development in the future..

In the autumn of 2016, Denton Resources, an ESSCO affiliated company, approached certain principals about jointly acquiring the now available TimGinn Option because its StargateII Database had identified a significant, deep target on this property. These principals did not pursue the Denton offer to jointly acquire the Option. Coincidentally, a short time later the following news was announced-

In early 2017, MCL raised private placement funds to explore the property. ESSCO was approached by MCL about using the SGII data to identify the drill targets on the property. Some correspondence took place last year, but as yet, no agreement with ESSCO has been  reached.

The  paid promotion 'Stateside Report' of March 2017 (see link above) included a map of the SGII anomaly outline, even though MCL did not, and still does not have an  agreement with ESSCO. 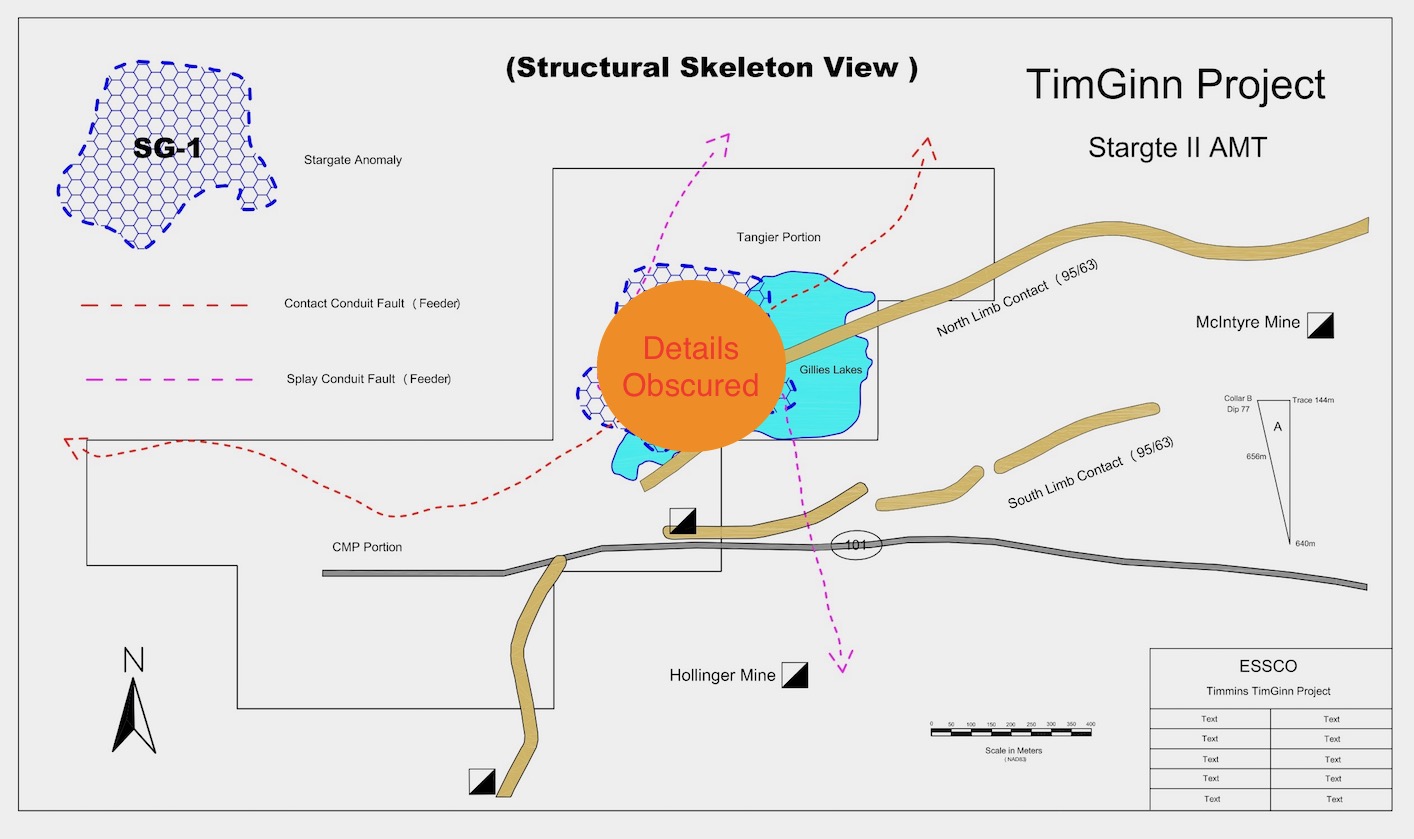 In June, 2016, ESSCO provided a map outline of its interpreted anomalies on the Fuller property, adjacent to the Hollinger Mine. Proposed drill targets with vectors and pierce point data are available.

The company has not requested any further data from ESSCO. 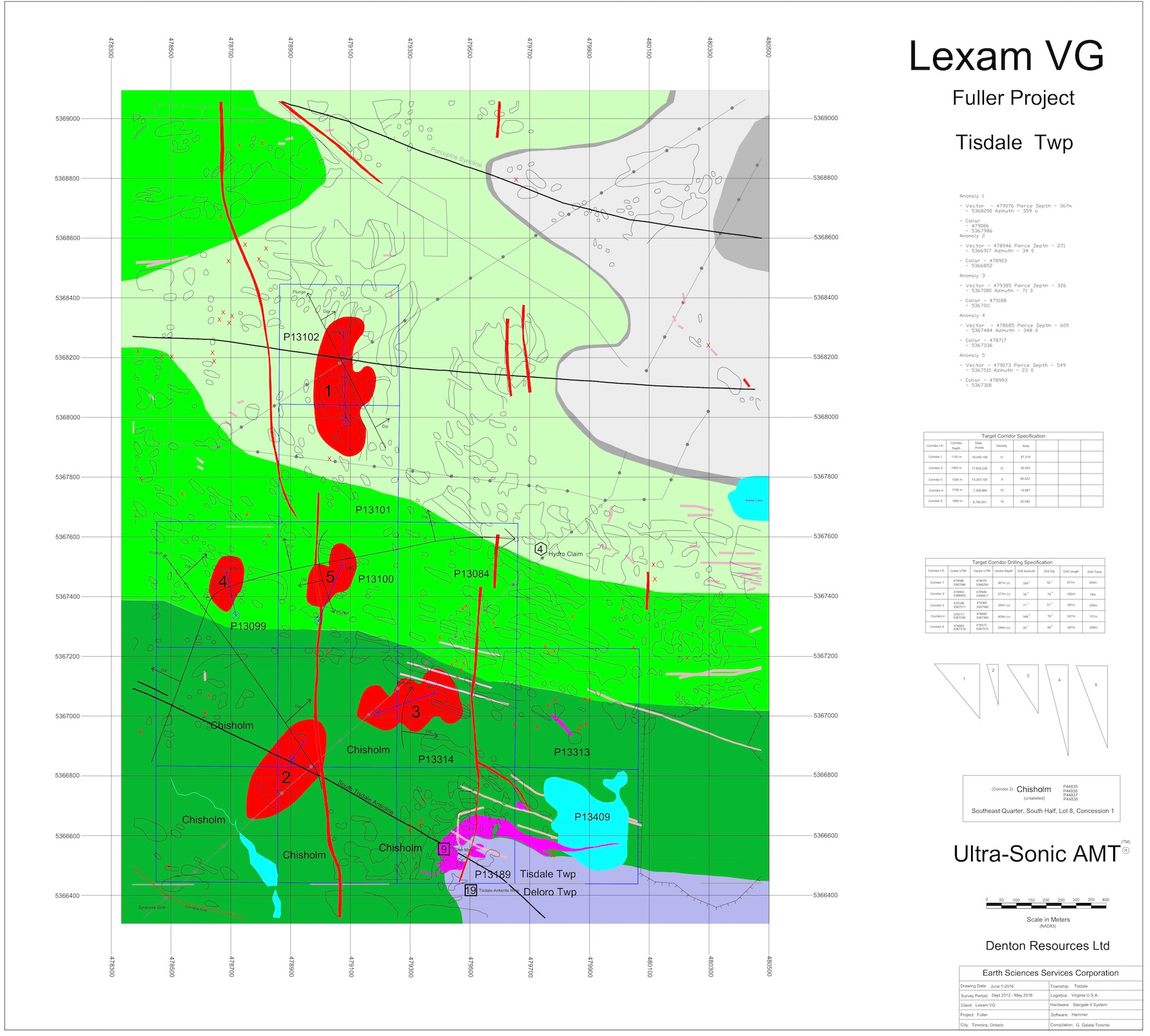 This property was covered during an earlier Stargate II survey over the Walker Lane area of southwest Nevada and northeast California.

The historical, but limited 19th century gold production in this area came from several small high-grade veins which outcropped at surface, and were mined until no longer economical.

Private investors in NRG had inquired if ESSCO had any data on this property. This map is posted for information purposes only.

ESSCO has provided an initial SG II drill target to the management of  NRG. Watch for drilling news. 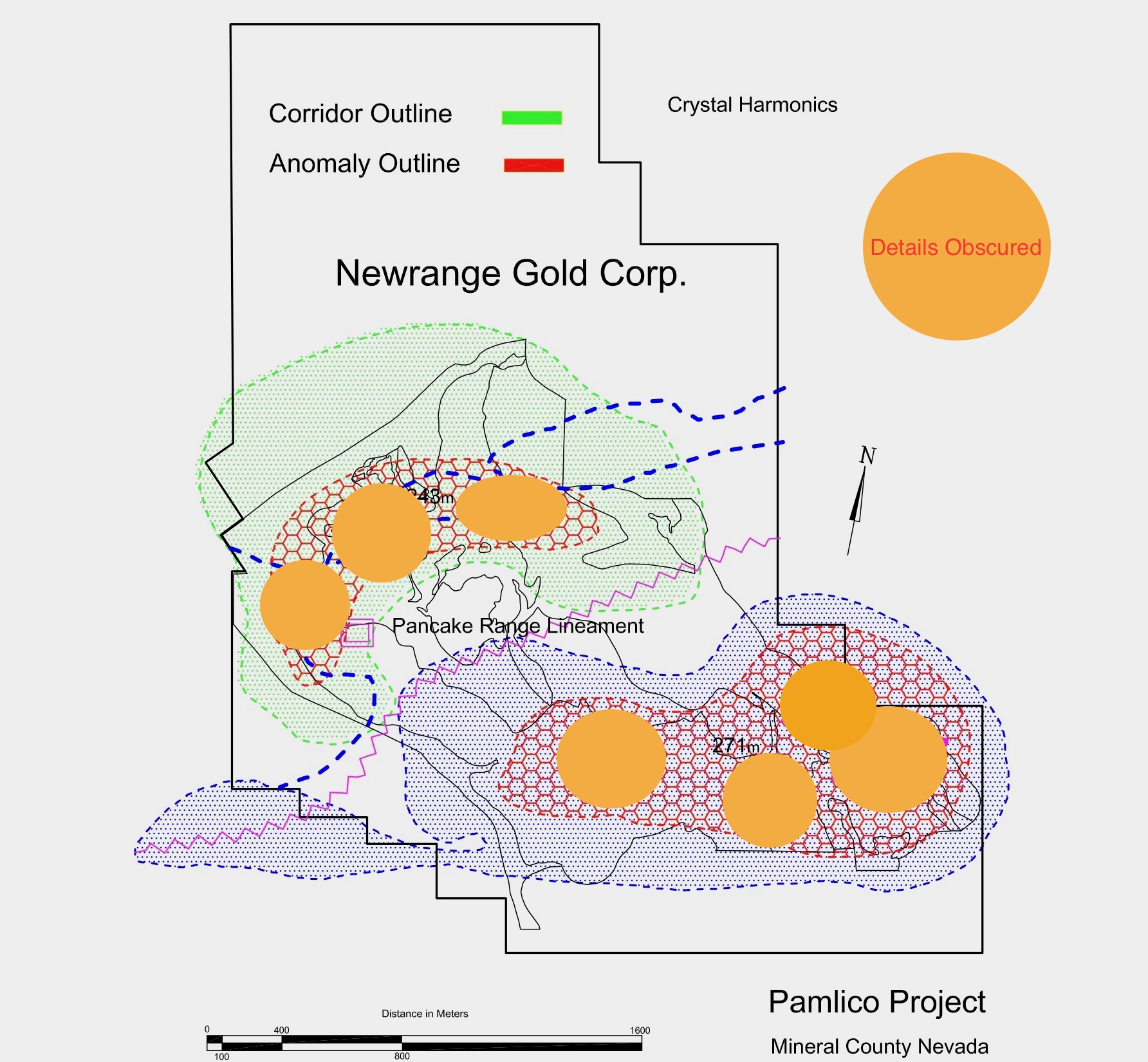 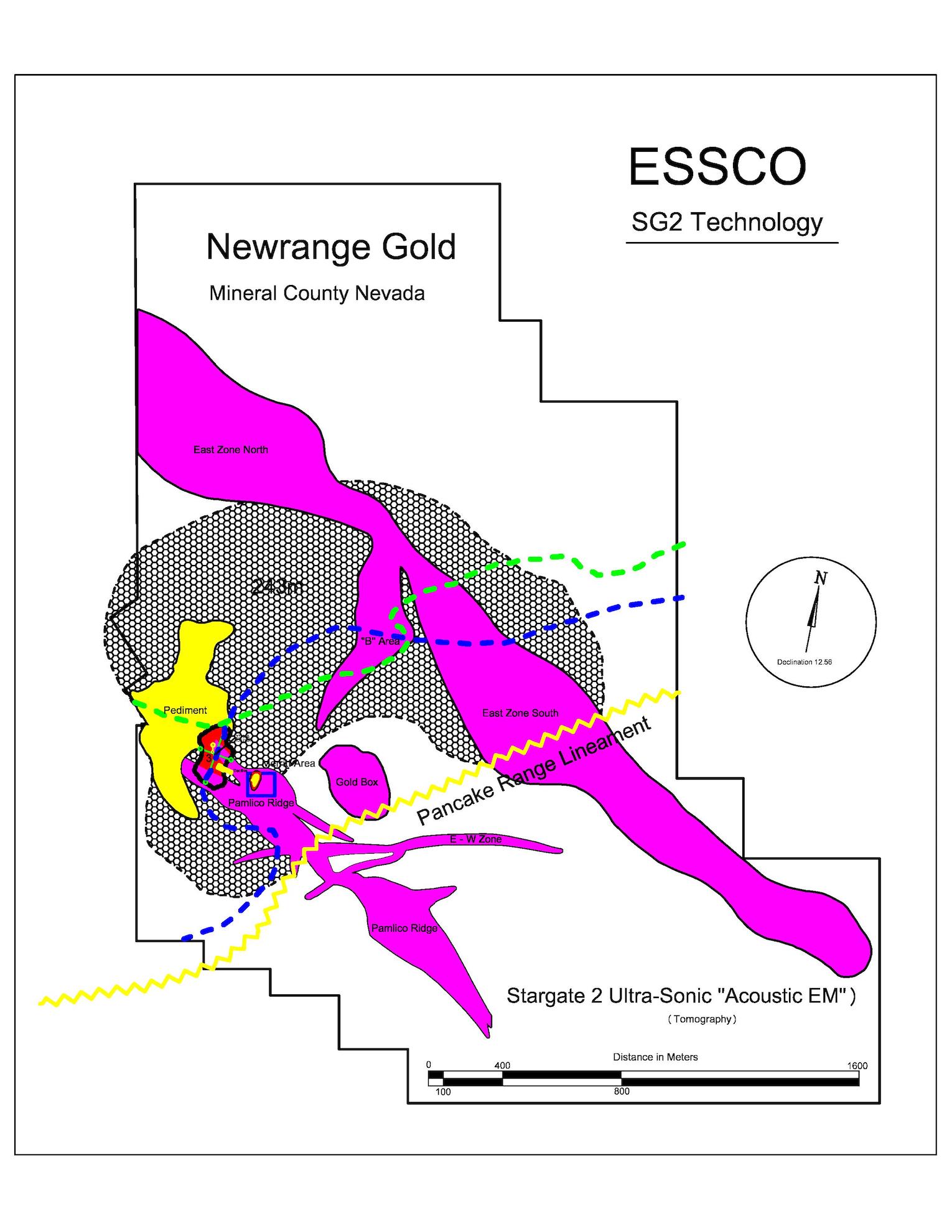 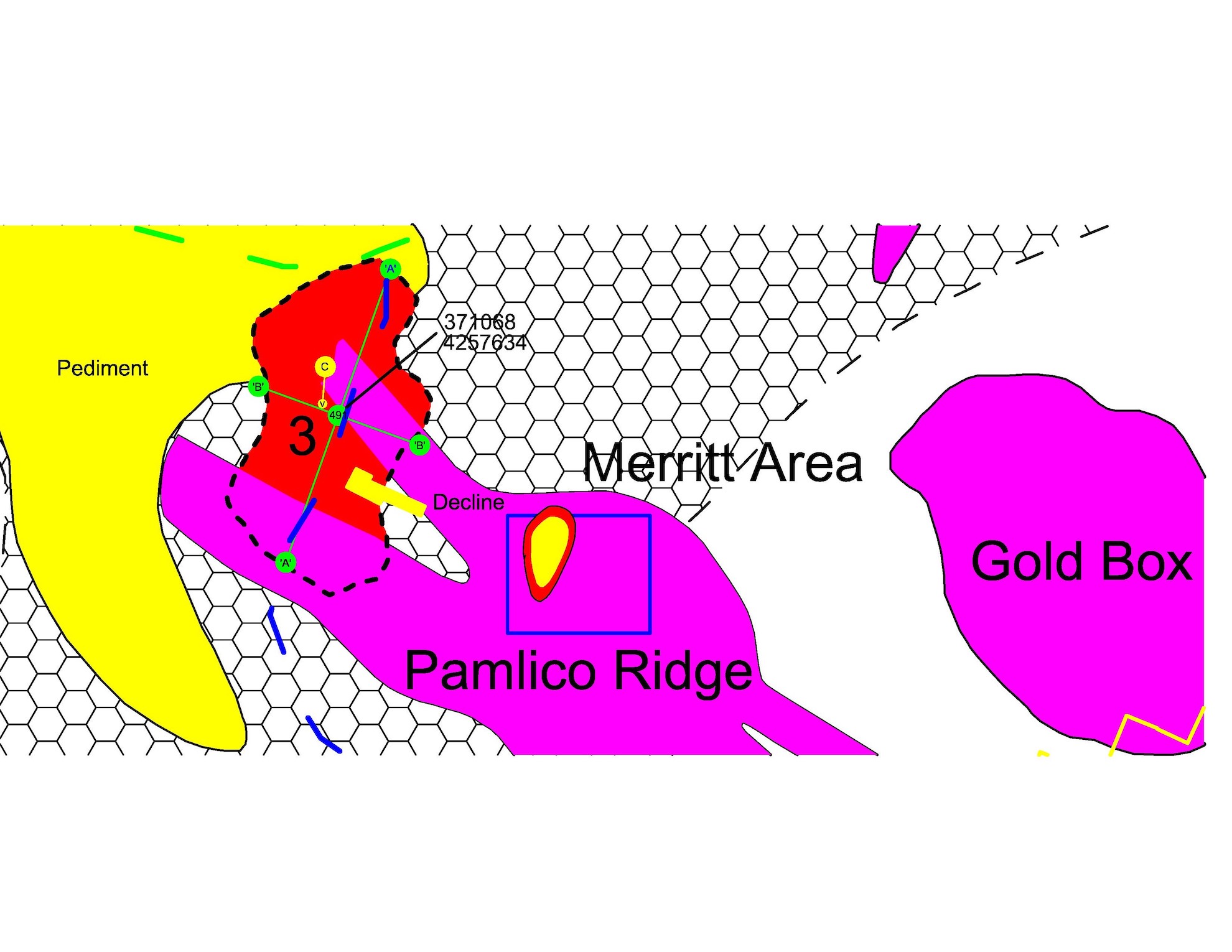 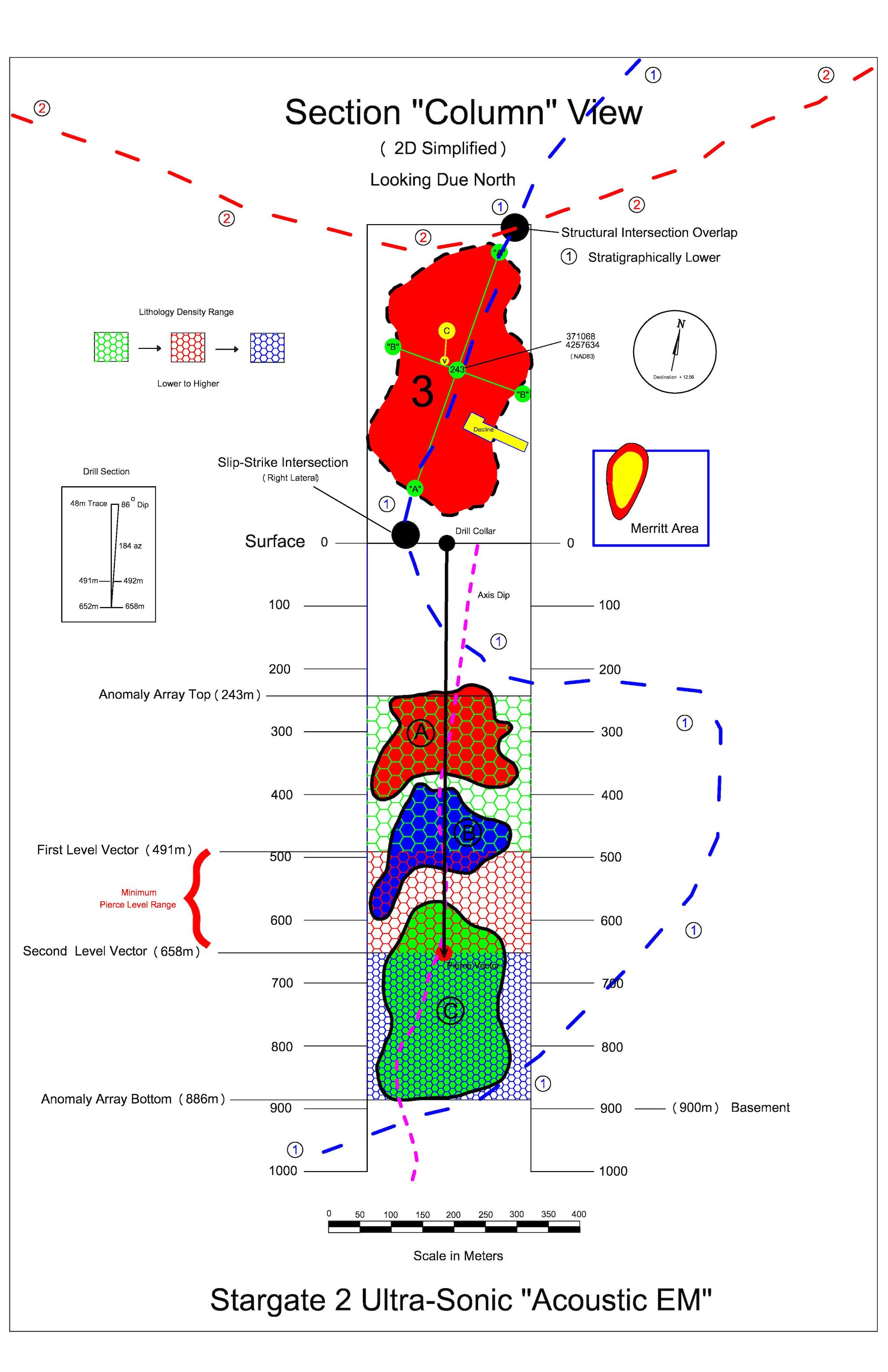 A large Stargate II anomaly  was identified  near Windy Lake,

in the northern portion of the Basin, adjacent to the Onaping Depth Project 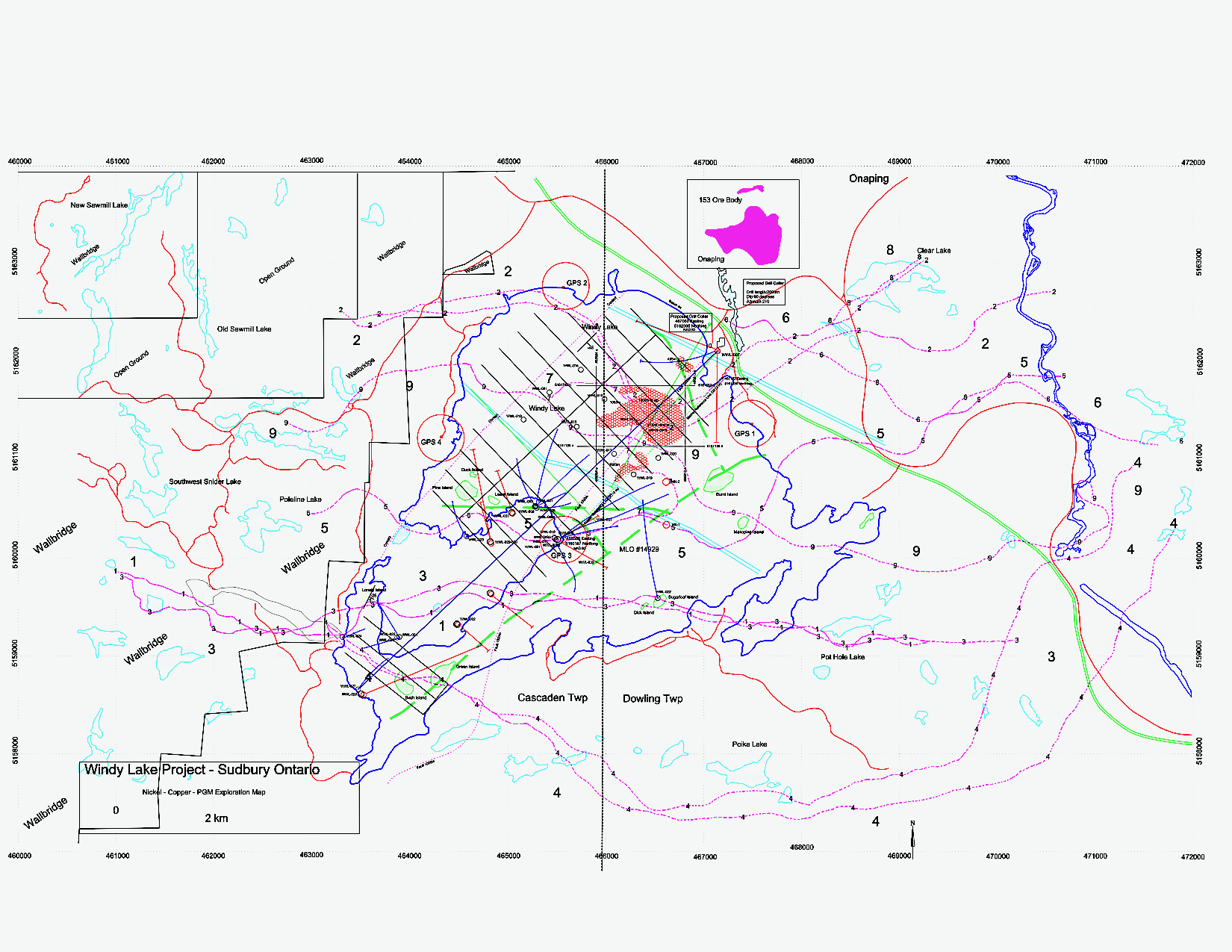